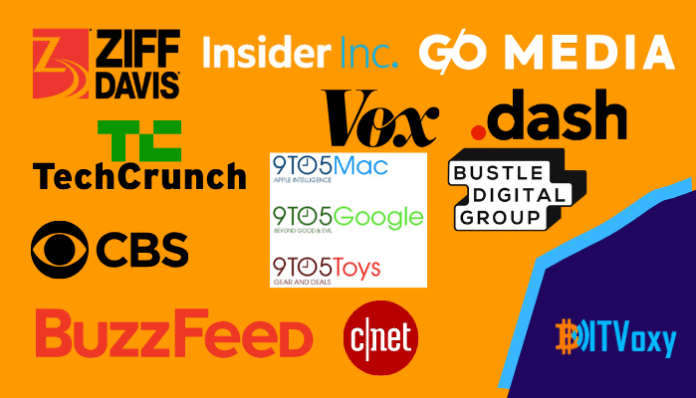 The Digital groups generally grow from a flagship website to either acquiring or creating additional brands for varying niches Some may even have their origin stemming from print media such as Conde Nast, Future Plc, etc.

Tiny Boards creates and acquires job boards. A typical cost for posting a job on job boards within the network is $299 for 30 days. If you have a job board with around 200K -1mm+ monthly visitors then Tiny Boards would potentially be interested in acquiring your job board.

The network consists of:

The Bustle Digital Group (BDG) consist of 9 media brands which boast an average of 84 million readers and 42 million social fans.

Before I list the media brands within this group, I would like to note the group’s acquisitions of The Outline on March 27, 2019. Founded by Joshua Topolsky, The Outline was an online publication focused on “power”, “culture” and the “future”. The site was still run by its founder after its acquisition by BDG. The publication was later shuttered after laying off much of its entire editorial team on April 3, 2020. It is evident that The Outline’s operations were not meeting expectations.

The 9 Brand which make up the BDG include:

The Future PLC is a Publishing and Digital media Megalith, The company has over 133 brands which publish content across fields such as video games, technology, films, music, photography, home and knowledge. The company is listed on the London Stock Exchange and is a constituent of the FTSE 250 Index.

The British media company, Future PLC began back in 1985 as Future Publishing by Chris Anderson. Based in Somerton, Somerset, England, the companies the first magazine was the monthly English computer magazine, Amstrad Action.

Some of the most notable Brands:

Founded in 1999, The Gamer network is a family of the most popular websites dedicated to video game-related content. This extends to gaming events such as gamesindustry.biz-events, EGX, EGX Berlin, EGX Rezzed, MCM Comic-con, Star Wars Celebration and PAX.

1981 Media which is a new company register earlier in January 2020 are the operators of VGX/Video Games Chronicles, a partner of the Gamer Network.

You can learn more about partner site under the Nlife Media umbrella such as Nintendo Life, Push Square and Pure Xbox in our next entry.

Formed in 2010, the company is an online media publisher focused on “creating vibrant and informative websites with a strong community-based focus”. Nlife Media is a partner of the previous entry, the gamer network. Nlife Media’s websites are really popular, they have attracted a combination of over 9 million unique visitors and 16 million page views a month.

Design Technica is a privately funded and owned corporation which operates Digital Trends, Digital Trends en Español, and The Manual. The company has offices in New York City, Portland, Los Angeles and Chicago.

The Manual is a men’s lifestyle blog aimed at “show men how to live a life that is more engaged”.

PMC is an American digital media, publishing, and information services company based in Los Angeles and New York City. It publishes more than 20 digital and print brands, including Variety, Rolling Stone, WWD, Deadline Hollywood, BGR, and others. PMC’s Chairman and CEO since founding is Jay Penske.

On April 2, 2020, PMC announced that it would launch Sportico—a new vertical focusing on the sports industry, later in the year.

Penske has brands such as:

G/O is a digital media group that manages former Gawker Media properties. The company was formed in April 2019 when Great Hill Partners, a private equity firm, purchased the websites from Univision for $20.6 million.

Prior to the sale, the former Gawker Media properties had operated as Gizmodo Media Group after being acquired by Univision following the conclusion of the Bollea v. Gawker lawsuit and subsequent bankruptcy in 2016.

Conde Nast is global american-origin media company which mostly operates print magazines focused on Fashions, Music, Entertainment & Lifestyle but also includes digital components such as Wired, Ars Technica and Pitchfork. The company prides its self for having some of the worlds leading print, digital, video and social brands.

Founded in 1909, Conde Nast was created by a popular American publisher, Condé Montrose Nast who launched his magazine empire with the purchase of Vogue. Conde Montrose Nast Published the Magazine under the Vogue Company Banner until incorporating Conde Nast in 1923. Vogue was created in 1892 as a New York weekly journal of society and fashion news.

The Company has grown over the years via a combination of new magazine launches and acquisitions. One example is its acquisition of Pitchfork back in 2015.

The 9to5 family of Sites are a network of blogs which covers various tech companies and focuses such as Apple, Google and Electric vehicles. The 9to5 sites origin stems from its flagship blog, 9to5Mac which was founded in 2013 by Seth Weintraub, an IT stranded in Paris.

The 9to5 family of websites has a unique way of paying its writers/contributors, each contributor has their own AdSense banners. The network comprises of 9toMac.com (covers Mac/Apple), 9to5Google.com(Google), 9to5Toys.com(Gadgets/Tech), Electrek.co (Telsa/Electric Vehicles) and DroneDJ.com (Drones).

Mansueto Ventures was founded in 2005 when Joe Mansueto acquired the assets of Inc and Fast Company Magazine from Gruner + Jahr USA Publishing Company.

Joe Mansueto is an American billionaire and the founder, majority owner and executive chairman of Morningstar, Inc.

Eric Schurenberg is the current CEO of Mansueto Ventures. He has previous experience as the editor of CBS MoneyWatch.com and BNET.com and managing editor of Money.

Original know as Business Insider Inc., Insider Inc is an American online media company which focusses business and finance stories across its websites. The company changed its name back in 2017 with the aim to branch out to different subjects on social media.

Founded in 2007 by Henry Blodget and Kevin P. Ryan (Silicon Alley Insider Inc), Business Insider is the flagship website of the group and covers business and finance. The company has received funding from Jeff Bezo’s investment company Bezos Expeditions (2013). Axel Springer SE acquired 88% interest back in 2015, improving their ownership 98% with Bezos owning the rest of the shares. As of 2018, Axel Springer SE owns 100% of Insider Inc.

BuzzFeed is the leading independent digital media company delivering news and entertainment to hundreds of millions of people around the world.

Known for its online quizzes, “listicles”, and pop culture articles, the company was founded in 2013 by Jonah Peretti and John S. Johnson III with the aim of on tracking viral content. The company has seen a steady growth into a global tech media company, covering topics such as politics, DIY, animals, and business.

In 2006, while working at the Huffington Post, Peretti started BuzzFeed (originally called BuzzFeed Laboratories) as a side project, in partnership with his former supervisor John Johnson. In the beginning, BuzzFeed employed no writers or editors, just an “algorithm to cull stories from around the web that were showing stirrings of virality.”

According to an October 2015 Fortune article, Ziff Davis comprises 30% of parent company J2 Global’s $600 million annual revenue (2014) and is increasing 15% to 20% each year. Analyst Gregory Burns of Sidoti & Company calculates that Ziff Davis is worth $1.9 billion.

Founded in 1992, CBS Interactive is a subsidiary of the CBS Entertainment Group division of ViacomCBS. The company is a content network of information and entertainment websites that covers news, sports, entertainment, technology, and business.

DotDash is the Digital Media subsidiary of IAC, an American holding company which owns internet/media brands.
The company stems from Mining Company founded in 1996. Founded by the owner of General Internet, Scott Kurnit, Bill Day and a group of New York City Entrepreneurs. Its initial focus was on maintaining 1,800 topic areas, but after five years of operation, this number was reduced to around 700.

The Mining Company later became About Inc.”, and the website address from “miningco.com” to “about.com” in May 1999.

On the 2 of May 2020, About.com was relaunched/rebranded as DotDash with a new strategy. CEO Niel Vogel lead the charge to refocus Dotdash’s Marketing Strategy and business model. The new model was now content focused on niche-specific vertical markets.

Today these niche specific-websites consist of :

Vox Media is a digital media company that began back in 2005 as SportsBlogs Inc. The company was founded by Jerome Armstrong, Tyler Bleszinski, and Markos Moulitsas. The company later rebranded as Vox Media in 2011.
The company’s lines of business include the publishing platform:

The company was the end result of Verizon’s acquisition of AOL in 2015 and the core assets of Yahoo! in 2017 which were merged to form Oath Inc. The company was later renamed Verizon Media in January 2019 while maintaining its AOL and Yahoo! brands and Dual headquarters.

On May 3, 2021, Verizon announced that 90 per cent of the division would be acquired by Apollo Global Management for roughly $5 billion, and will simply be known as Yahoo as soon as the agreement comes to a close. Verizon is set to retain a minor 10% stake in the new group.

So there you have it, That was not little research of the webs best and most popular digital media groups. Have i forgotten any Digital Media group? leave us a suggestion below.