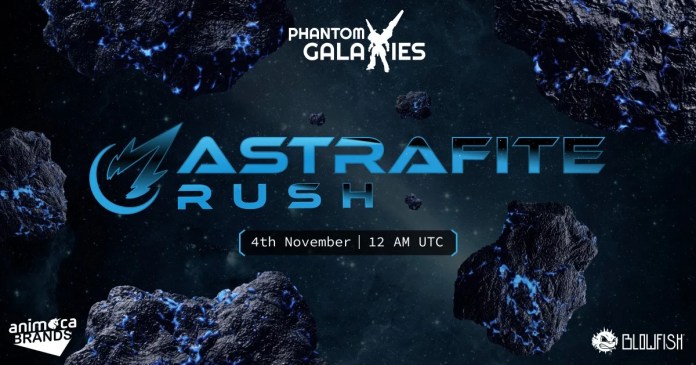 The Astrafite event will see players competing against time to mine Astrofite and defeat Fire Dancer pirates to earn the game’s Astrofer tokens (ASTRAFER).

What are Astrafer Tokens? These are the official governance and utility tokens for the Phantom Galaxies game.

The first AAA-scope blockchain game of its kind from Blowfish Studios, the game aims to attract traditional game enthusiasts and Web3 natives alike with its quality.

Four episodes of the Alpha Version are available now.

To participate in the play-to-earn event, players are required to:

The event will run across 6 “cycles” over a course of 6 weeks with each run beginning on Friday at 12 AM (UTC) to the following Wednesday at 11:29 PM (UTC).

Players are required to visit the official Phantom Galaxies – Astrafite Rush webpage to save their progress. This page is also the central point of reference for players to keep track of their progress and claim rewards at the end of the event.

What are the Astrafer rewards?

Completing the objectives of the event (that is, mining Astrafite and defeating Fire Dancer pirates) gets you on the events leaderboard.

This leaderboard then helps to determine the 10,000 players who will receive Astrafer tokens based on their final leaderboard position.

“Astrafite Rush breaks significant new ground for Phantom Galaxies, as the project’s first in-game online event. This is a crucial part of our Alpha process, as we test new waters and give players a taste of live and competitive gameplay. We can’t wait for everyone to launch into the Rush!”

Animoca Brands Co-founder and Chairman, Yat Sui was thrilled with the launch of Phantom Galaxies’ first play-to-earn event. He also emphasised, “We believe that the glossy and polished AAA game experience of Phantom Galaxies will be able to onboard traditional gamers to Web3 and the open metaverse, allowing them to enjoy the benefits of true digital property rights.”

Blowfish Studio is a subsidiary of digital property rights metaverse and gaming company, Animoca Brands. Animoca Brands acquired the Syndey Australia-based indie game developer and publisher back in July 2021 with an upfront consideration of A$9 million (approximately US$ 6.6 million) plus payments of up to A$26 million (approximately US$ 19.2 million) conditional on certain employment and performance targets.

Stranger Things 3: The Game and AER are Free at The Epic Games Store