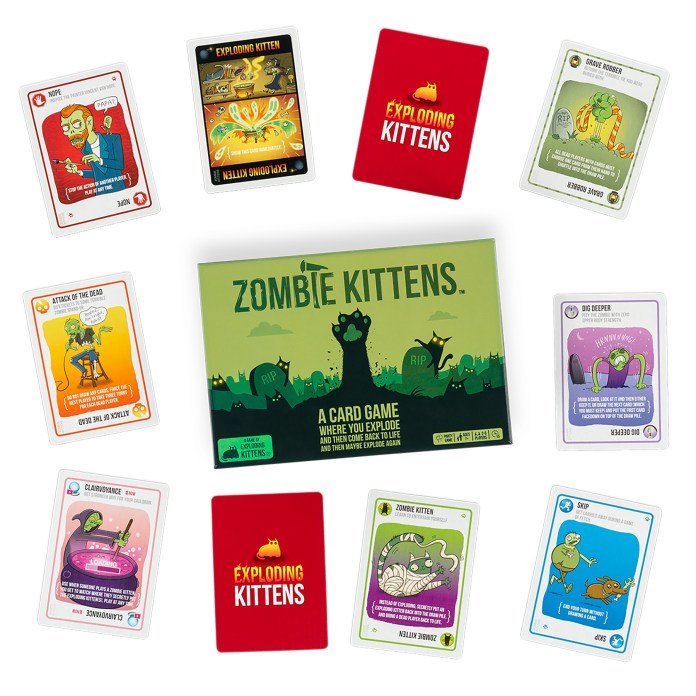 Zombie Kittens is a card game where players explore and then come back to life, and then maybe explode again.

Launched after the Netflix-exclusive mobile game, this game is the seventh iteration of the game.

This new iteration solves the problem of player resurrection faced in previous iterations with the ability to play the game on its own or with an expansion pack.

This is monumental, for the first-time players who are exploded can be resurrected and return back to the game thanks to the new Zombie Kitten card.

The game is great for both adults and kids 7 and up.

The game features new cards and new art from Matthew Inman, Creator of The Oatmeal. The game takes two to five minutes to learn and 15 minutes to play. Groups of two to five players can play together but when combined with the original Exploding Kittens deck, groups of up to nine people can play the game.

Due to the success of the flagship Exploding Kittens franchise, the company has sold over 20 million games worldwide and expanded its IP to Netflix in a first-of-its-kind deal, which includes Exploding Kittens – The Game, an exclusive version of the beloved mobile game available now, followed by an adult animated comedy series, titled Exploding Kittens, coming in 2023.

Zombie Kittens is available at Target, Target.com, and ExplodingKittens.com for $20.99 and will be available at Walmart and Walmart.com this August. For more information on how to play, please watch this video.